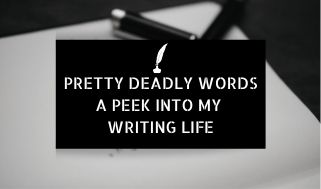 I finished up my first board exam about 14 hours ago, and I like to think it went nice! And what’s the best way to celebrate? Writing a blog post of course (And totally ignoring the fact that I still have two strenuous months ahead of me)!

So, today I decided to participate in a fun, little monthly meme hosted by Ash @Ink Words and Ash and Anoushka @Dipped in Ink! I decided to switch things up a bit, by writing about my writing life instead of my reading life, haha!

What is it about? (Taken from Ash’s blog)
Pretty Deadly Words is a monthly meme for writers. it’s co-hosted by ash @inkwordsandash and anoushka @dippedinink. each month we will post ten questions for you to answer. they’ll be based on your writing project and your writing in general. it’s designed to help you understand your plot, characters, their personality traits, flaws (etc) and your writing style!

Let’s get into this!

Q: When was the first time you ever thought: “You know what? Words are pretty amazing and the real world sucks. I think i shall be happier living between words instead” and then gladly took up the amazing hobby of writing and daydreaming between science essays and english finals? (how long have you been writing)

ANS: To be honest, at some level, I’ve always wanted to write stuff, and I’ve always thought that ‘words are pretty amazing and the real world sucks’ to quote the question. I mean, I’ve been reading since I was like 5, and books have always been my comfort place, so yes I believe in word supremacy.
But I started writing when I was 16, I think, back in December of 2020. I’d written poems and stuff for school magazines, but I started a novel (which I still haven’t finished!) in December of 2020, and started writing poems like, properly in January 2021. I’ve wanted to write before that but with school and extracurriculars, I just never had the time.

Q: Do you generally type out your novels because the clicky-clacky noise of the computer keys is YOUR FAVORITE or do you prefer the good old pen on paper method where you can torture more trees and bring them under your cruel rule? (do you type or handwrite and why)

ANS: I type, because I hate hand writing! If it were up to me, I’d digitalize all my school assignments, and type them too! Also, my handwriting sucks, especially when I am writing fast, so when I’d finish up the first draft, I literally won’t be able to read what I’ve written. And typing is also just faster than handwriting, so, yes, I am totally team typing (and team alliteration)

Q: Genre that you otherwise refer to as the love of your magically miserable writing life? Also what is the genre you are most fond of / fill entire computer memories (or blank notebooks, WHICHEVER YOU PREFER) with? (what’s your most written genre and favourite genre to write?)

Q: Spill your treasonous secrets that might just lead to your death: are you a plotter or pantser?? If plotter, SHOW ME YOUR DELICIOUSLY INFURIATING PROCESS while trying not to brag too much about it, YOU BLACK-NOSED OLIVE. (plotter or pantser? tell us how you go about creating your stories!)

ANS: Pantser, definitely! I get the idea, I type it down on my phone in five words, and then I just start writing! I definitely went about this wrong for my first novel, because there was definitely a point where I was like, how. do. I. take. the. plot. forward. But then I managed. It happens for poems as well, like I write the first line of poems and sometimes I’ve literally gone back, and been like- what the hell was I even thinking?

Q: First novel you ever wrote/dreamed about and were scolded for unhealthily obsessing over (in your head of course) during the middle of a physics class? (what’s the first novel you thought of?)

ANS: Oh, wow, this question brings back memories. The first novel I ever wanted to write was fantasy, in a world very much identical to that of The Magic Faraway Tree and Harry Potter. I think it was a mixture of both, and the kids went to a magical school, with a magic tree or something.

Q: Do you ever just fling your pen across the room and dramatically collapse on your bed because you’ve hit a block? If yes, how do you kick the slump and if no, GIVE ME YOUR MAGICAL POWERS!! (do you ever hit a writers block? if yes, then how do you get out of it and if no, how do you avoid it?)

ANS: Oh, all the time. Actually the time I am actually able to write novels is less than the time I am in a writer’s block. I do write poems often though. As for overcoming writers block, I feel like writers block hits me whenever I am cramped up with work, so I try writing more when I am not cramped with work, because sadly, writing is not my first priority. It’s like my third priority, after study and blogging, so, yeah.

Q: What event prompted you to lose all your remaining sanity and retreat into the woods, madly scribbling story ideas and muttering possible titles under your breath (what got you into writing?)

ANS: Books! Or more specifically, Harry Potter. I know JKR has said certain things-that-must-not-be-named, but she is the one who inspired me to write a novel. Harry Potter’s written so beautifully that I was like, I wanna give birth to something this beautiful! (Weird analogy, I know, but you get my point.)
Enid Blyton also influenced me a bit, and so did Rainbow Rowell, or more particularly, Fangirl.

Q: What force keeps you in this world of mad magic? (what motivates you to continue writing?)

ANS: As ironic as it sounds, reading other books! I just want to be someone who can make other readers happy as authors have made me happy. I want to bring a smile on other people’s face, as they read my books. Creating beautifully idealistic worlds is something I wish I could do full time!

Q: What was the first genre you headfirst dived into? do you still splash in its waters? (what genre did you originally dabble in? do you still write it?)

ANS: Well, considering the first novel I ever wrote is the one I am still writing, I definitely do still write it. My book- The Musical Love Story of Noah and Lisa is a YA Contemporary Romance!

And those are the ten questions I had to answer this month! Do check out Ash and Anoushka’s (Hey, more alliteration!) post- I’ve linked to them above! If you’ve done this meme too, do leave the link in the comments!

P.S.-1 If you are intrigued to read my novel, click here to find it on Wattpad! I like to think it’s kinda nice, it’s got over 10k reads, hehe. It isn’t completed (yet), but I have written like 37 chapters, so that might keep you busy for a while!
And here’s where you can read my poems!

P.S.-4 – Are you guys not liking my latest posts as much? Because I’ve been getting a lot less engagement than I used to. Do let me know in the comments what I can do to improve! 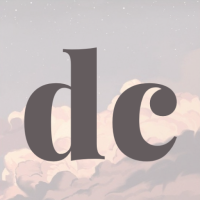 As Crazy As A Hare