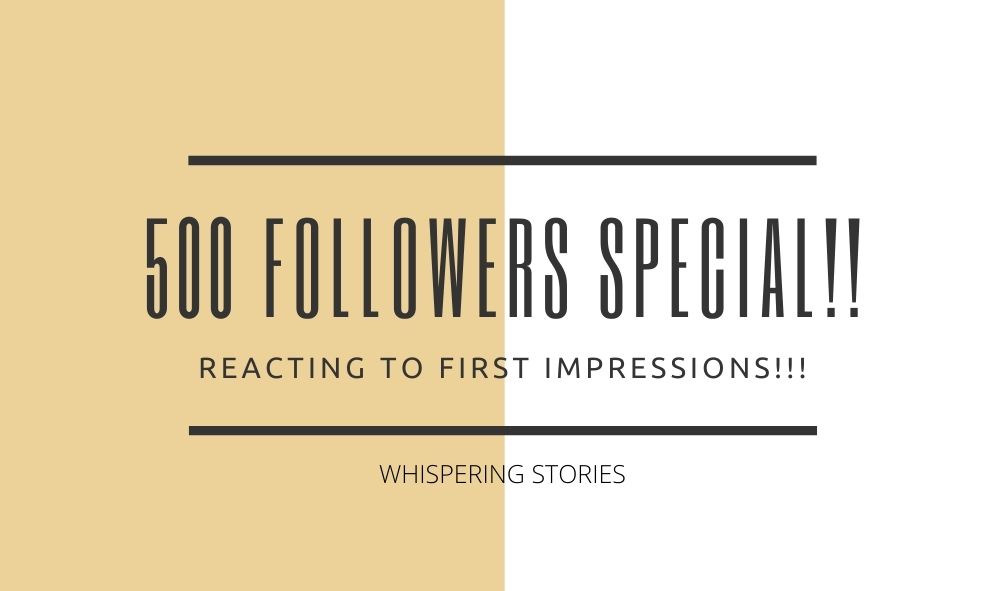 So, as the title tells you, I have reached 500 followers!

I honestly cannot believe this, I mean, this is CRAZY! I have been blogging for only an year, and when this happens, it IS super crazy! So, a big big big big big THANK YOU to all of you! All my readers, followers, commenters everyone! THANK YOU!

So, in a previous post, I asked you to share your first impressions of me, and some of you did, and I was pleasantly surprised! Here they are: (The impressions are in italics and my reaction in is normal font)

What I think of you now: Not super cool. But cool! Also, I got to know you were 16. And you can be funny whenever you want but, you are mostly formal. At least with me. You are modest? Yeah, sometimes. You are very loyal and so you are very good friend. You also have trust issues. You give great advice! You know some cool stuff like baking, playing guitar and ukulele. You don’t like to listen or read other people’s recommendations. At least not until you want to. And it’s a waste of time to recommend books and songs to you because you will only read and listen to them when you want. I enjoy your company.

Okay, uh, I am hurt! You think I am not super cool?.🥺🥺 Okay, okay I am kidding, I know I am not cool. I am just an average girl. And yes, well, it’s been super hectic and stuff ever since Jan, which is when I think we started talking. So, my humor’s been off and my coolness is not the best. I do have trust issues, but they rarely get out of control. And as for other people’s recs, it’s just that I have so much stuff to listen and read anyway, that all the stuff other people recommend gets deprioritized. And if I don’t like the stuff I read or listen to, I can blame it on myself and scold myself, but I can’t scold the other person, right?

My first impression of you was that you were very into blogging and did a lot of work for your posts (which still holds true). I also used to think that you hadn’t read many novels as you acted you did (sorry for thinking that ) but later realized that you read wayyy more than me and so many others! My other impression were that you were pretty friendly, but slowly you turned a bit formal, and mature. Especially on hangouts when we had just made TWC, I thought you were kinda shut off from us, and there were times I didn’t like you much if truth be said. But the thing is, I didn’t know you. The time when Tiction took a break from hangouts, I remember sometimes when I needed to talk to somebody, you were like there, you just…..ALWAYS there. And you have no idea how much that meant to me, the way you never judged, and always gave me good advice. I liked that it was kinda mutual, you also shared some of your stories with me, we chatted a lot at that time, and I begin to like you. When it comes to trust, you are one of the few friends I have that I can trust with A LOT and that sags A LOT (WDW REFERENCE, I’LL HATE YOU IF YOU DIDNT GET IT). You are super understanding and loyal now that I know you, loyal as a doggo . Sometimes, I feel like you try too hard, and if that’s true, please ….don’t.
Okay, was that too long? Can I say some more? I will say some bad stuff now.

I used to (and still do) that I think you can be pretty arrogant and rebellious when u wanna be, which I love hate about you.

Okay, I am super into blogging and while I might not physically do a lot of work for my posts, but I do think about what I wanna post whenever I am free. AND WHAT?! HOW DARE YOU QUESTION MY CLAIMS ABOUT READING? But, now that you have realised, it is okay, I forgive you.
Also, I get why you didn’t like me, because as I said above, I have trust issues. I have had five friends for my entire life, and I have not really opened up to anyone else, so well. I don’t even open up to those five people and family completely sometimes, so opening up to strangers on the internet, wasn’t the easiest.
And well, I become too loyal once a person become a friend, and that’s a flaw in me right there. I sometimes become too loyal for my own good, and end up getting hurt.
As for the arrogance, hey, I am arrogant only where I am exceptionally good, okay? So, that’s valid. And yes, I have my rebellious moods.

My first impression of you was that you were a very serious person and a nice friend to everyone (wrong about serious but I guess you’re still nice)
You loved books and romance novels (still is the same)
You were serious about blogging (still are)
and you were a computer genius and new all kinds of things about blogging, tons of things about both of them more than me (you still know more about blogging than me I think, idk)
I also thought you have a lot of free time(turns out you don’t)
I guessed you love music(which you are obsessed with so I was once again wrong)

Wow, look at what we have got here! Pannaga says I am serious, and Aanya says I am not! Well, both of them are correct in a way- I can be super serious and fun, so. And yes, I love books! And yes, if blogging was something with which I could earn enough, I would have considered it to be a viable career option for me. And no I am not a computer genius!
As for free time, I did have free time before.
And hell yes, music is the soundtrack to my life! Like I always have a song playing in my head!

My first impression was that you are this person which defines the word ‘cool’, and while you are cool, believe it or not I am the c o o l e s t- just kidding, lol. and well I also thought that we are pretty similar in taste and stuff since you were the first person I saw who had read Kasie West and was a huge fan(not unlike me), which we are I guess. And actually, I saw the comments and people are like, you are so formal but tbh, at first I thought you were goofy and anything but formal and later came face to face with your formalness lmao also, you were kinda my idol in blogging and stuff, which you still are!
so in short, you rock, babe!

Why does everyone think I am cool? All my bitmoji has is a pair of headphones! And my posts are not that cool either! I do love the word cool, but I don’t use it much! And yes, we be alike!
And thanks Tiction!!

First I used to think you were kinda formal – because your replies to comments were always like that – but I knew you had a sense of humour, like in your posts!! now I’ve seen you send blue hearts to people you’re closer to – and I know maybe you were more formal because you just didn’t know us that well! 😉

Uh, wow, that is accurate!

I am your new follower so I am currently in my 1st impression mode right now, so it is you are an introvert, always indulged in books(in a positive way) and very straightforward person…

Well, according to me at least, this is true. I don’t believe in mind games, you know? Being straight forward is so much easier.

And now what I think: I love your profile picture and blog I don’t know much about you other than you are book crazy like me!(I’ve only followed you for a couple weeks)

Yes, I am book crazy!

My first impression of you was that you seemed like you were smart and friendly.
What do I think of you now? I still think you’re amazing, and I love how much time you seem to put into your posts! That’s probably how you have so many followers, lol.

Thank you so much! Ah, well, the follower thing is all you guys!

My first impression of you was that you are very chill and friendly.
I still think you are very open and sociable with the blogger community. And your just a cool/chill person.

My first impression was that you seemed really nice and super welcoming into the book blogging community and those impressions haven’t changed.

I do love to welcome bloggers into the community, cause the struggle’s real!

And that’s all guys! Just, thank you so so so much for making this journey memorable and fun!! Also, if you wish, leave down a comment, letting me know what you thought of me then and what you think of me now!